Please see the election results, below. There is one page in this post. If you have trouble viewing the document, you can download it by clicking here.

Board Imposed Settlement for the Standard ICI Agreements

If you are having trouble viewing the PDF, download it by clicking here. 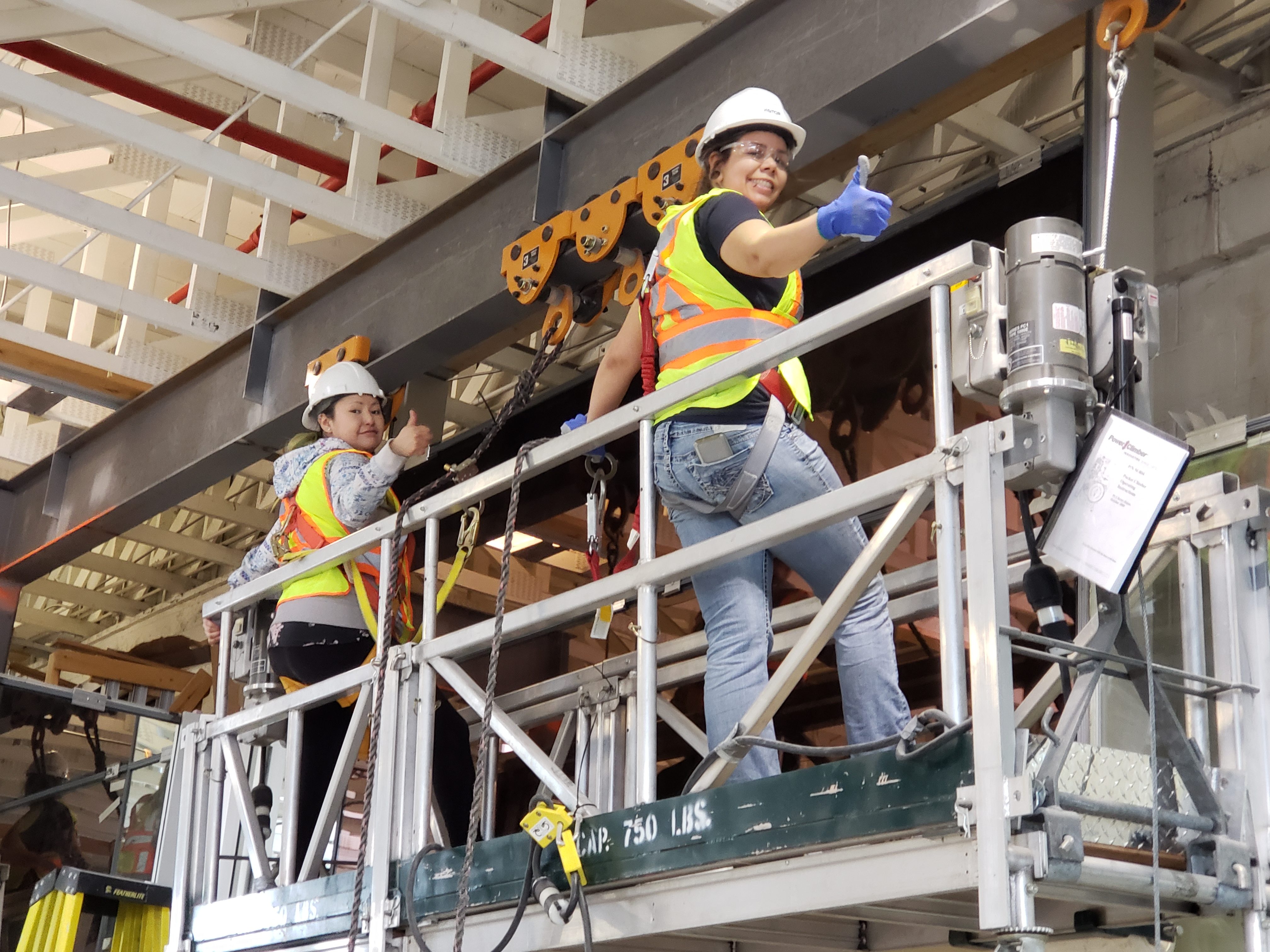 SkillSource and FTI BC Partner on a New Recruitment Program

By ERILEY | Finishing Trades Institute of BC | No Comments

The FTI of BC and SkillSource BC are looking for individuals who may be interested in a career in the Finishing Trades. Thanks to Funding from the Canadian Federal Government, we are looking at an 8 week training program that will allow participants to receive all of their necessary safety certifications, an opportunity to try out the four crafts we represent, get placement with one of our Union Contractors and be registered in Level 1 apprenticeship training for the craft they choose. This program is open to all Members of DC 38 including family and friends of DC 38 members.

Government funding is being made available to help those individuals who are chosen to participate in this pilot program. There will also be an opportunity to receive Union wages and benefits while working for one of our signatory contractors. Click on the link below if you or someone you know may be interested in this program.

This could lead to an exciting well paid career in one of our Finishing Trades.

The office has reopened. Since office hours vary from day-to-day, please call ahead (250-385-8312) before visiting. If the office is closed, payments can be slipped under the door of the DC38 office.

Canada’s prosperity depends on Canadians having the skills, training and experience they need to get good quality jobs and succeed in a changing economy. To help meet the increasing need for more workers in the trades, the Government of Canada is taking a leadership role by introducing new initiatives to encourage women to enter and succeed in Red Seal trades where they are under-represented.

Today, the Honourable Patty Hajdu, Minister of Employment, Workforce Development and Labour, announced that the Apprenticeship Incentive Grant for Women is now available to eligible apprentices.

The new Apprenticeship Incentive Grant for Women provides $3,000 per year or level, up to a maximum amount of $6,000, to registered apprentices who have successfully completed their first or second year/level of an apprenticeship program in eligible Red Seal trades. This, in combination with the existing Apprenticeship Completion Grant valued at $2,000, could result in combined grant support of up to $8,000 over the course of their training. Women apprentices who progress in their training on or after April 1, 2018, may be eligible for the new grant.

The new Apprenticeship Incentive Grant for Women supports gender equality and better economic outcomes for women by giving them more opportunities to access typically higher-paying Red Seal trades where they are under-represented.

Link to the news release:  Government of Canada launches new Apprenticeship Incentive Grant for Women to help them get certified in Red Seal trades

This project is a boon for the sector, and will provide thousands of construction jobs when it gets under way.

We represent 40,000 highly skilled unionized construction workers and are part of a network of 400,000 members across Canada. We are committed, prepared and eager to work on this project.

The BC Building Trades was appointed to the Premier’s LNG Working Group in 2013 and has been doubling down on our efforts to ensure our province has the skilled workers the industry requires, and that British Columbians have the skills to be first in line for the jobs on LNG projects. This investment signals a commitment to local workers and apprentices.

Some of the ways our members have prepared for LNG:

In addition, we have more than $50 million in assets across our many union training programs. This includes land, facilities and equipment.

We enroll more than 7,000 apprentices and trainees and spend more than $18 million annually on training and apprenticeship programs.

We recognize that LNG industry will require workers who are uniquely skilled and may not be available in B.C. or the rest of Canada, justifying the hiring of temporary foreign workers. We expect that these workers can help train B.C. workers while they are here so that we can ultimately fill that skills gap.

Site C approved by the BC government

By ERILEY | BC Building Trades, NEWS | No Comments

The voice of B.C.’s unionized construction sector lauds the decision today by the B.C. NDP government to move forward with the Site C hydroelectric dam.

“We recognize this has been a difficult decision for the newly elected NDP government,” said Tom Sigurdson, executive director of the BC Building Trades (BCBT). “We respect and appreciate the many contributions from all sides of this issue because this was certainly not an easy choice. That said, completing the Site C dam remains the best choice for British Columbian families.”

He adds, “The time has come to turn this project around.”

Sigurdson hopes the government will put in place measures to increase the number of local workers hired, support apprenticeship opportunities on the project and create opportunities for First Nations and women.

The project has been plagued… (Continue Reading)

Tradespeople at Seaspan’s North Vancouver shipyard are facing the possibility of major layoffs after the company announced that a gap in construction of new federal non-combat vessels is coming next year.

Butch Sidey, business agent for the Marine Shipbuilders Union local 506, which represents unionized workers at Seaspan, said a worst-case scenario would see “big layoffs [in] a year or a year and a half when there’s not going to be any work between ships.”

There are currently 600 tradespeople working at the yard.

Laid-off workers would be hunting for new jobs at a time of high demand for trades workers in B.C.’s construction sector.

If layoffs materialize, “it’s going to be… (continue reading)

“Most DC38 construction members are aware of their Market Recovery (MR) deductions, and some grumble about this,” according to Dave Holmes, Business Manager of District Council 38.

“All too often though there is little recognition of the program’s benefits for both fellow members and our contractors,” he says.

The Market Recovery Fund was created on May 11, 1997, when in response to a shrinking contractor base and too many unemployed members, Painters voted at a special meeting to establish the program.

“At the time non-union competition was putting us out of business, quite literally,” says Holmes. “Our employers were losing their long term clients and the wage gaps, up to 50%, were making us uncompetitive. Our choices at the time were to either slash the Agreement or try to gain work through the implementation of Market Recovery”.

Don Bauer is a DC38 Painter in Victoria who says he has worked on as many as 40 or 50 Market Recovery jobs in the last twenty years.

“I was there for the 1997 vote with Brother Holmes and I voted in favour of setting up the fund,” says Don.

“I was seeing our market share dropping just about every day it seemed.  I think the fund has become very important to maintaining work for our members.”

“Sometimes I tell members who may grumble about their deduction that MR really amounts to a small payment towards buying yourself a job,” says Don.  “I think that’s a pretty smart investment in yourself and in the Union.”

In the 20 years since implementation of the Fund, the Union has:

Peter Wilson moved to BC from Toronto in 2008 when he joined the Union for work as a Commercial Painter.  He thinks that the MR program makes good sense.

“The last two jobs I have worked on were helped by market recovery contributions, and they kept four or five of us busy for a year-and-a-half,” he says.  “If I have to give a little to get a little so that I’m not sitting at home, I’m happy to contribute.”

Those 172,500 additional hours generated just under $7 million in additional wages and benefits to DC38 members.

Given that the cost of the fund was about $530,000, Market Recovered projects resulted in a thirteen-to-one return on every dollar paid out.

Jim Ewing is a DC38 Lather with 42 years of experience and says one in every three jobs he has worked on in recent years is the result of MR support.

“Ninety-nine percent of our members only see the MR as a deduction, but it is essential if our contractors are going to compete with the non-union operators,” says Jim.

“And what doesn’t show up in the MR statistics is the additional jobs handed to us because we are on-site and the client gets to know us and likes our work.  A lot of that goes on,” he says.

Another member who benefitted from the WCIAF is Wayne Howatt who retired as a DC38 Lather last June.  “I do miss it a bit,” he says.

“Sometimes some of our members don’t see how tough it is to compete with the non-union sector.  Our benefit package is worth $5 an hour and when added to the wages it can mean a non-union Lather is being paid $25 an hour while we are at $40 — that’s a big difference,” says Wayne.

“I certainly saw the benefits of the MR first-hand, and I think it is essential if our contractors are going to be able to compete.”

Business Manager, Holmes, agrees: “As the stats show, MR creates job opportunities for our brothers and sisters. I supported the program when it began, and I support the program now, knowing that my contribution benefits every single member who works in the craft.”

“In 1997, Painters made a choice to support their fellow Brothers and Sisters. Twenty years later, with the addition of the Lathers & Drywall Finishers, we continue to support each other.  A proud choice for a proud organization.”

Effective May 1, 2017, District Council 38 will be increasing the Monthly Dues to offset the 2016 and 2017 Per Capita Tax increases levied by the International.

Section 17(a) of the General Constitution states in part…

In 2016 the monthly Per Capita Tax we pay to the International increased $1.50.Although we are required to increase the Monthly Dues in conjunction with any increase in the Per Capita Tax, District Council 38 decided to postpone the 2016 increase.

There is never a good time to inform the membership of a dues increase, but we can not continue to absorb the increase.

Therefore, effective May 1, 2017, the Monthly Dues will increase by $2.00 for all members, excluding Life Members. Life Member’s dues will NOT be increasing.